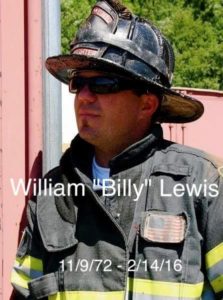 A letter from parents to their family and friends.

I feel the need to tell you Billy’s story. Quite possibly it’s just therapy for me. We all have been overwhelmed by the devastating loss of our Billy. Although I do tell people now that Billy has been found! Found by our Lord, found by our family and friends who have gone before him,  found comfort, found peace and light.

His career began at the age of 19. We knew right from the beginning some of the horrible calls he went on because the captain in Live Oak would always try to keep us in the loop, asking us to “watch him”. He didn’t share his work with us. I believe that he wanted to shield us from the life that he experienced. I remember asking him “how was your shift?” – standard answer was “you don’t want to know!”

Though the impact started early on, the huge, noticeable changes were obvious about 4 years ago. Billy became very argumentative, angry and frustrated and intolerant. He began moving away from the activities and causes that he had given so much time to as well as some friends. About that time he lost his home due to the horrible mortgage crash and bad advice. About the the union members voted to go on a48 hour work shift. We distinctly remember him saying a number of times that it was a really bad choice. He once said “it will take someone dying” for them to realize this error. Little did we know! He said for many stations it wouldn’t be a problem but for stations like his it would be detrimental. His station was located in Oak Park – the busiest and worst areas in Sacramento and quite possibly California. Stress along with sleep deprivation was inevitably the downward spiral for him.

Three years ago he realized he needed help. He found a counselor who made him feel comfortable. He was diagnosed with the long term, chronic PTSD. Two years ago, we received a call from his captain. We were told we had to come pick him up – he had a breakdown. We would later find out that there had been numerous horrific calls during his last two shifts. It took him down to his knees. After a few days in our home he assured us that he would see his counselor, he would be “fine” and he went back to his place.

The department put him on light duty at the training center. He said there were a couple of guys who were obvious skeptics. Treated him badly and I know that hurt him. He was invited to attend a major PTSD retreat center for first responders. During that time period my brother died. Billy took it very hard.

Billy came home from the week long retreat so happy and confident – our son was back! He was on a cloud. He felt he had been given the tools to combat this illness. He was also given the insight to some personal issues and was willing to share with all of us. But as often happens when we are on a “cloud,” reality sets in and it was not meant to last.

Sometime later he felt he was well enough to go back to work. Unfortunately, the department sent him back to the same station. The morning he drove up to go back to work he called me, sitting in his truck outside the station crying. He couldn’t go in. I suggested he go to the main office. Later that day we learned he resigned. We couldn’t convince him to seek disability. He said if he filed he could never be hired as a firefighter again by any department. He loved his profession and still hoped for a future.

A few months later he attempted to get re-instated in Sacramento. He met with the chief and explained honestly what had taken place. He told the chief that he could not work on the ambulance. He did have enough seniority to make this request and the re-instatement was accepted. He was so excited. He even went out and bought new uniforms. He was told he would have to spend a couple of weeks in the offices and then would be sent to a station. Two days later he gets and email – not a call – a blankity / blank email from some pencil pusher in another office. The message said that there was a policy that if you were gone more than six months you lose your seniority and would be required to go on the ambulance as if you were starting all over. Billy had missed the deadline by just a few days! The chief didn’t know about the policy and told Billy he couldn’t by-pass it! Devastating is an understatement. He received no correspondence nor was he asked to meet with anyone after he resigned. He nor the chief knew about this policy! We have always been astounded by Billy’s bad luck. My cousin said “Billy couldn’t buy good luck!” And that seemed so very true, so often. We would just shake our heads often asking “Why!”

PTSD, as I have read eats away at the heart, mind and soul. We have also learned just recently from a professional who specializes in PTSD that recent studies have proven that long term, chronic PTSD has a neurobiological impact on the brain. There is damage to the gray matter in 3 lobes of the brain and specific brain regions literally shrink. We were told that it is comparable to those who have had head trauma injuries. This knowledge has had a great impact on us. It has offered a much clearer understanding of both the mental and physical impairment that Billy endured. It is heartbreaking for us. We know now that as the years moved on he just couldn’t purge the horrific memories and his brain just didn’t work correctly. We also believe that Billy’s heart was just too big. He couldn’t forget. Loneliness added a huge element to his life. Without a partner he went home alone.

Our hearts have always swelled with pride for Billy not just because he was our son but the profession he decided to pursue – helping others. However, he was more loved and respected that we ever realized. The wonderful memorial along with the messages from all around the country and some from other countries was proof of that for sure! The self medication of alcohol is very typical with the illness. We are proud to say that during the last 6 months and even in death he was sober. However, ultimately, he had no strength to fight the despair when huge new obstacles came up during the last few months of his life. He was tired and lost hope. As I have said over and over – it was the “perfect storm”!

I have absolutely NO doubt that Billy would NEVER have consciously hurt us. His heart and mind were broken. And bless his heart – he obviously couldn’t think clearly.

I could not live my life without my faith in God and a true deep spirituality that I carry every day. I believe it is imperative to find a spiritual side in our life. It is there inside of us. There is no doubt in my mind that there is a higher Being, my Lord, my God. Many around the world use different names. They worship differently. They have different ideas about the hereafter. Still the huge, vast majority BELIEVE! We pray that you find this inner belief to sustain you when life hands you tragedy.

Billy loved being a firefighter. The paramedic part of his career did great harm. He said once that the worst part of his job was witnessing “man’s inhumanity to man”.

He DID NOT ask for this burden, this illness, it was handed to him as surely cancer is handed to some and not others!

We thank each of you with sincere gratefulness for your support and comfort.