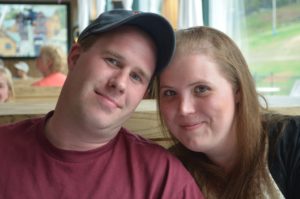 Andrew and I met in April of 2011. A mutual friend introduced us. Some people say that love at first site does not exist, but I knew from the moment we met that he would be my forever.

Andrew joined the Sweden Fire department in 2013 and was promoted a year later to Captain. Andrew was the type of guy that everyone wanted to be paired up with. When he got on scene it was all work for him. He saved his lieutenant from falling into a hole onto a water heater that could have seriously injured him. He was probably dangerous at times, but then again, I think that every firefighter is put in dangerous situations daily.

Andrew’s passion was being in the bucket of the ladder truck. He would tell me it was like a video game how he could maneuver the bucket around. His superiors would have to tell him when it was time to take a break, or he just would not take one.

Andrew was active with all the fundraisers that both of his departments put on. He was especially active with “Operation Christmas Angels” a local church and the Bridgton fire department teamed up every year to provide Christmas presents in the area for children who would otherwise not have a Christmas. Every Christmas we would take the trucks out and deliver presents. Andrew had a way with animals and children. I think he just had such a huge heart they were just naturally attracted to him. Andrew left behind 3 children of his own and he was such a wonderful daddy.

Andrew really started to show his signs of PTSD during the last 2 weeks before he took his own life. He had been sleeping maybe 2 hours a night and vomiting every morning. I would ask him if he was okay and he would say he was fine he was just having nightmares.

Andrew also taught extrication classes and was the go to guy for extrication on both of his departments. My friend from high school had passed away in a car accident and she was not discovered until the morning after her crash. Andrew was there and was the one who had to cut her out and come home to tell me about it. She was the one that he would have nightmares about. He would say that the dreams felt so real and that it wasn’t her he was cutting out of the car, it was me.

I know I can’t go around with the what if’s. I just hope that somehow his story and the signs that I was seeing can help someone else. If I could say anything to someone that is suffering from PTSD it would be to get help. You need to talk about it, it is not a shameful thing. I know as firefighters it’s just do the job and push everything else aside. Don’t become part of a statistic and leave the people who love you behind. The pain you leave your loved ones is indescribable. I know for myself there will always be a piece of me that died along a long with him that I will never get back.