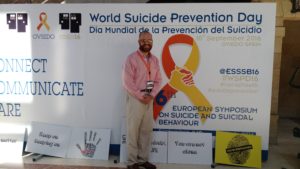 Wow! The 16th European Symposium on Suicide and Suicide Behavior in Oviedo, Spain was such an amazing experience! Researchers and clinicians from all over the world met to discuss, share, and collaborate with one another in an effort to reduce the incidence of suicide. The opening ceremony began with a realization that every 40 seconds a life is lost due to suicide. The ripple effect from each of these events led to an acknowledgement that nearly all of us have lost someone to this terrible tragedy. As both a clinician and researcher I was struck with this thought for perhaps the first time; and suddenly the reason people avoid the topic of suicide became so intensely clear… We avoid talking about suicide because we have been affected by it in some way. Perhaps, even while reading this blog, you are reminded of a friend or family member you have lost. Let’s face it, we don’t enjoy being reminded of these tragic events. However, I believe that we have an obligation, to the ones we have yet to lose, to understand suicide more clearly so that we can develop better, lifesaving, interventions. We can better honor the ones we have lost by openly discussing their lives, and the factors leading to their deaths. I wanted to share three quick thoughts I have gained from my time in Oviedo.

Suicide is not a spontaneous decision, and is typically the result of meticulous planning. However, the act of suicide happens in a single moment. One of the most effective things you can do to help someone who is contemplating suicide is to ask for more time to get them some help. The vast majority of hospitalized suicidal patients report they are glad they did not complete their plan.

Individuals who attempt to end their own lives often feel as if they are not understood. In other words, they feel lost in the crowd. By being present in the life of others, you are telling them that they matter. We can all appreciate the feelings we have when we are noticed by others. Have you let the people around you know that you see them? You may save their life!

Too often we have concerns about others and never make our concerns known. If you suspect that someone is considering ending their life… ASK! Asking if someone is suicidal does not “put the idea in their head”, nor does it make your relationship forever awkward. If anything, you are communicating that you care about them and are concerned for their well-being. This is increasingly true for young people, who often report feeling worried about “telling” on their friends. Parents and educators have an especially important role in teaching children how to respond to a suicidal friend.
As we take part in suicide awareness month, it is my hope that we can both honor the lost while better preparing for the future. If you are someone who is considering suicide, I beg you to reach out for help. You are not lost, and I want you know that we see you. I had the privilege of meeting hundreds of people while in Spain who are working diligently to help YOU! Give us a chance to make a difference!