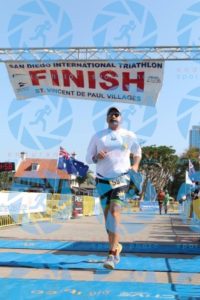 Line from “Get off of My Cloud” from the Rolling Stones’ 1965 album – December’s Children, – Jagger/Richards

Hey, you, get off of my cloud

Don’t hang around ’cause two’s a crowd

On my cloud baby”

The telephone is ringin’

Don’t you people ever wanna go to bed?

‘Cause you feel so good

Do you have to drive me out of my head?

In 1996, as a young fire officer, I aspired to become a HAZMAT Technician (in hindsight, I have no idea why!?).  Part of the selection process included a physical fitness assessment in a Level-A (fully-encapsulated) suit.  At the time, I barely passed, due to a relatively poor fitness level and rather high blood pressure for a 34-year old.  I weighed about 211 and was not in good cardio-vascular shape.  I would later find that “192” is my “ready” fighting weight.

I started training.  And like everything else I enjoy, I would become obsessed with physical training.  After a few weeks, I loved running.  I started running 5k’s, 10k’s, ½-marathons, and a year later, I would run my first marathon (26.2 miles).

I would continue running and training for the next 20 years, eventually competing in over 100 running, biking, triathlon and adventure-type races.   Ironman Triathlon (2.4 mile swim, 112 mile bike, 26.2 mile run) was a looming goal that would remain elusive for some 15+ years.  I was signed up to do a ½-Ironman distance triathlon in 1999, but the sudden death of a family member cancelled/postponed this race.

For the past 20 years, or so, fitness, exercise, etc. has been a big part of my life.  Not necessarily for the physical benefits, but I think I did it mostly for stress relief (probably why I did so much!).

From 2008 through 2012, I competed in four “70.3” half Ironman Triathlons.  These were all difficult and I all but gave up on my goal of hearing Ironman Announcer Mike Reilly scream, “Matt Shobert – You are an Ironman!”  But, as us Type-AAA, OCD folks do, I signed up, a year in advance, for the full Ironman Distance Triathlon in Tempe, AZ slated for November 17, 2013.  This would give me a year to properly train for this arduous goal.  The training would have me lifting, running, biking, swimming, etc. a minimum of 12-hours per week, but normally much more than this, all while working 50+ hours per week, as a very busy fire chief.  On a typical day, I would awake at 4:45 AM to go for a 7-mile run before work, swim for 45 minutes on my lunch break, and do a 6-mile round- trip run to a 75-minute spin class, at my gym in the evening!  I was eating properly and truly became a lean and mean fitness machine at 189 pounds on my 6’1” frame!

The year went quickly, and we (Butters and my supportive wife Tami) anxiously arrived in Tempe, AZ, a few days before the race.  I was scared sh**less, but I felt like an athlete, ready to go.  While this event is a race, most novice athletes, like myself, do it just to finish within the 17-hour cut-off time.  This takes the pressure off.  I awoke at 3:15 AM on November 17, 2013 to prep for the daylong race.  I force-fed myself granola bars, bagels, Naked Juice, etc. in the middle of the night.  My heart was racing and I was anxiety-filled and scared.  At 7:00 AM the cannon (literally) went off, signifying the start of my Ironman and “Start Me Up” by my boys, the Stones’ was blasting over the loud speakers.  I found my zone and started my day.  I would complete the swim in one hour and 45 minutes, had a flat on the bike, but finished the 112 miles in 7 hours and 40 minutes, with transitions; this would give me nearly seven hours to finish the 26.2-mile run.  Do-able!

At 22:00 hours, or 11:00 PM, at night, after starting my venture 16 hours prior, I was 26 miles into the 26.2-mile run!  I heard Mike Reilly shout over the PA, “Matt Shobert – You Are An Ironman!”  It was a dream come true, finishing in 16 hours and four minutes.  All of that work and expense was worth it.  There was nothing like it.  I still get choked up, when I think about achieving this arduous goal.  It’s odd to be proud of yourself.

Little did I know, that my newfound fitness level would save my life a few months later.

On July 2, 2014, at approximately 09:00 AM, I awoke facedown in the dirt, at a brush clearing operation.  My hands tingled and felt numb.  I wondered if I was having a heart attack, or perhaps a stroke.  I was alone, my crew had not arrived yet, and the brush- clearing Bobcat that launched a fist-sized rock, a distance greater than half a football field that struck me on the side of my face, was driving away, in the other direction.

I tried to get up, but couldn’t; it was then that I realized I was bleeding profusely, to death actually, from the bottom of my face, where my mandible or lower jaw had been torn off my head, by the projectile.

The doctors would tell me on July 4, 2014, that 98% of the populace would have died in the dirt that day, but my fitness-level saved my life.  I always add that my OCD probably helped, as well (sic)!

Six major surgeries later, that would include loping off the top of my left hip and bolting it to the steel-plate in my head for a new jaw, thoughts of suicide, a lost career, a traumatic brain injury and serious PTSD, I was on the road to recovery to my new normal.

I am now two years into my recovery.  I still don’t have any teeth on the left side of my head, but they are in the works.  I still have a hard time remembering stuff and have chronic headaches.  Moreover, I struggle with PTSD – anger, fear, isolation, hyper-vigilance, paranoia, lack of self-esteem are all common occurrences for me.  I have no social filter and I have termed this as “PTSD induced Tourette’s Syndrome.”

I am in counseling that includes prolonged exposure therapy and EMDR, have taken a weeklong equine therapy experience, seen a Shaman and have been hypnotized.  I am on Zoloft and Xanax (trying to wean of the “X”).

As a result, I have started doing triathlons again.  I recently took a gold medal in the US Police & Fire Championships for an International Distance Triathlon.  Luckily, there aren’t too many broken down old guys like me, in my age group!

It has been a long journey, with some miles yet to go, but I am thankful for what I have and for being alive.  I should have died… but I am starting to slowly enjoy life again!

As part of my recovery, I became a certified Ironman Coach.  And, I am signed up for Ironman 70.3 in Tempe, AZ this coming October!