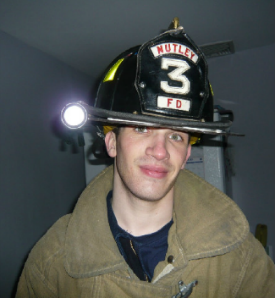 Letter from a father.

With a strong internal drive to help others, Scott had always dreamed of becoming a police officer, a soldier, or a firefighter. He struggled through his high school years fighting ADD and depression, and always relied upon his need to help others and make people smile as a way to cope. No one can ever say they were in Scott’s company and did not laugh, or at the bare minimum, smiled. His presence would light up a room and you certainly knew he was there.

Scott’s ADD unfortunately always seemed to amplify his problems. Yet his yearning to assist others drove Scott towards the advocacy for those in need, and defending those who could not defend themselves. Scott always gravitated towards the underdog in an attempt to fix issues and right wrongs. As a member of the high school “Dare to Dream” club, he advocated for the less fortunate, handicapped, learning disabled, or emotionally challenged, and tried to instill in them that they were not disabled, instead they were only different.

Scott himself dared to dream and pushed forward not letting anyone hold him back as he overcame his disabilities. And after a difficult physical and emotional struggle, Scott became a member of the graduating class of the Bergen County Fire Academy on August 6th, 2010. With a newly earned and certified title, Firefighter Scott Charles Bellucci had achieved what he thought impossible and fulfilled his dream.

As a member in a volunteer engine company, Scott was quick to volunteer or step forward whenever something needed to be done. Whether it was dressing up as Sparky the Dog on fire prevention days, showing cub and boy scouts the firehouse and engine, answering the call for assistance, standing by during the annual Fourth of July fireworks display, or answering a fire call regardless of the time or place, Scott was always ready willing and able to assist as needed.

Scott never gave up on his quest to help others, even if it meant stopping in the street if he saw someone who even appeared to need assistance. But Scott never forgot his roots and would on occasion stop in to see those in the Dare to Dream club where he would answer questions or just provide an ear for those in need. In 2011, Scott was asked to speak at Montclair State University where a convention for learning disabled high school students was being held. Wearing his dress blues, Scott took the stage and delivered a speech which was not prepared, written down, or even rehearsed. Scott spoke from the heart and knew exactly what he wanted to share with the audience, and did so in an exceptional manner. I thank God that Bob Haugh, Project Coordinator for the New Jersey Office of Special Education, was onsite and filmed Scott’s speech as Scott is now immortalized for all to see on YouTube.

Scott was a champion for those in need; however, he failed to be able to control his inner demons when it came to dealing with his ADD and depression. His outwards appearance was that of a smile and a love for his family, friends, and God. Yet internally his struggles continued until on February 17, 2012 when Scott took his own life. Not a moment goes by that Scott is not missed as we try to come to terms with the grief of his loss. The body might be gone, but the spirit lives on forever. Scott will never be forgotten.