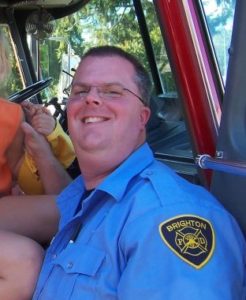 When Tim was 4 years old and living in the city of Rochester, NY, the city fire department sent a truck down our street to promote smoke alarms. The firefighters let little Timmy climb up into the truck and wear their helmet. From that day on, Tim wanted to be a firefighter. He never wavered in his goal. Tim started out as an Explorer on the Brighton, NY fire department. From there he became a volunteer and finally a paid firefighter in 1995. This was the culmination of a 20 year dream.

Tim loved being a fireman and helping others. While he struggled in high school with the relevance of the courses, once he started firefighter training, he had no problem with the course work. A co-worker said of Tim, that he was a great PR person for the fire department, because when a town resident brought their family to the fire department, Tim would be the first one up to show them around. He was wonderful with both parents and the kids.

He also gave to his community. He volunteered for Brighton Ambulance, was an Explorer leader for several years. He was an avid bicyclist, riding for many charities: The Tour de Cure, heart, and cancer. Tim was the first person to help all his family and friends with moving, hauling, babysitting; anything that was needed. He was a huge supporter of his godchild in all her endeavors. He was a wonderful son and a very protective older brother. He enjoyed kayaking, jet skiing and cross-country skiing. He loved photography and was at any fire scene where there was a possibility of good pictures. Some of his pictures were featured in a national fire magazine.

From late teen years on, Tim fought the battle of depression. At times it put him into a very dark space. Other times he could cover and hide his depression from everyone. It did not affect his ability to do his job as a firefighter. Tim fought long and hard for many years. He was a victim of both the insidious depression and over prescribing of depression medications. In the end, Tim just couldn’t fight any longer and took his own life. At his eulogy a co-worker (a cancer survivor) said “…depression is a disease like cancer. For some, the medicines work, for others they don’t.” Unfortunately the medicines were a part of Tim’s demise. Tim is missed everyday by his family and friends.